NO, QUEEN!: Mariah Carey Challenged by Peers to Prevent Trademark “Queen of Christmas”​

A while back, I wrote about the legal heat Mariah Carey had drawn over allegations of copyright infringement for her Christmas anthem “All I

A while back, I wrote about the legal heat Mariah Carey had drawn over allegations of copyright infringement for her Christmas anthem “All I Want for Christmas Is You.”

Now, she’s taking fire again…this time over plans to trademark the phrase “Queen of Christmas.” The trademark has hit a sour note with at least two of her fellow singers.

But do these new oppositions of the pop chanteuse’s trademark hold water?

Can anyone truly hold and trademark the rights to the title of “Queen of Christmas” and not inevitably be cast as the Grinch in the piece? Let’s take a closer look at the players and the claims!

Exhibit A: Mariah Carey, “All I Want for Christmas Is You”

Since the song debuted on Carey’s fourth studio album, Merry Christmas, in 1994, the upbeat Christmas carol has become a ubiquitous holiday staple. Love or hate the song, it’s arguably the most popular secular holiday tune of all time, being the only holiday song ever to sell over 10 million copies and be certified Diamond by the Recording Industry Association of America. It’s certainly the most popular since “White Christmas” by Bing Crosby. On the strength of this claim, the branding and associated trademark, which is incredibly broad in scope, make sense on its face. Except…

Almost two decades after Carey released Merry Christmas, singer Elizabeth Chan, who is famous for cutting new and original Christmas songs every year like clockwork, released an entire album entitled Queen of Christmas. Chan’s argument against Carey’s trademark claim is threefold: First, in her words, “[Christmas] is meant to be shared; it is not meant to be owned.” Second, the very broadness of the trademark, which encompasses a bewildering array of products, makes it a matter of concern – for instance, the idea that any article of clothing bearing the title “Queen of Christmas” would automatically be covered under trademark and therefore liable for infringement if it was created by home crafters and not authorized licensees. Third, of course, there’s the sting of the idea that one person could or should crown themselves the “Queen of Christmas,” especially since Chan already did so! And then we have…

Singer Darlene Love has no love for Carey’s trademark land grab. David Letterman bestowed that title on Love after almost thirty years of singing the holiday hit that cemented her reputation, “Christmas (Baby Please Come Home),” every year on The Tonight Show. According to Love, he gave her that title in 1993, predating “All I Want for Christmas Is You” by a full year, and she’s gone with it ever since. Entertainment Weekly quotes Love as saying, “…[At] 81 years of age I’m NOT changing anything. I’ve been in the business for 52 years, have earned it, and can still hit those notes!” Simply based on longevity, Love’s opposition arguably has the strongest case. But there’s still…

Serial number 90571927 at the US Patent and Trademark Office is a number that’s sure to resound in infamy for Christmas fans and IP attorneys alike. The language of the actual application includes such disparate items as her personally branded music videos and recordings; pet products; Christmas tree decorations (naturally); beer, wine, alcoholic beverages, and everything one might use to store, decant, or serve them; children’s books; clothing; personal care products; and foodstuffs. Of course, it’s not unusual for trademark applicants to want to make their marks’ terms as broad as possible in order to ensure maximum control over the branding. In that respect, it’s a very savvy business move by Carey, and one that has been done in the past by virtually every successful toy company, comic book publisher, and movie studio in the country. (Think any items branded after the Twilight franchise, the live-action Transformers movies, Iron Man/Avengers, or Minions, just to name a few.)

Interestingly, the contentious “Queen of Christmas” trademark isn’t the most bizarre or most widely lampooned in history. When you’re up against contenders who tried to trademark “the,” “Mc,” “Let’s Play,” and even the color yellow, this one seems like pretty weak sauce, really. But while the trademark may be technically valid and even business-savvy, this move may end up proving Carey’s eyes bigger than her stomach. No matter how well loved her songs may be, it’s difficult to imagine a world in which the backlash her trademark application has already engendered would not continue to gain steam and turn even many of her most diehard and loyal fans against her. Imagine if DJs and streaming services refused to play “All I Want for Christmas Is You” and/or Mariah Carey’s other songs in protest at the cost of millions in royalties to her, or if tens of millions of dollars of branded products went unsold and the manufacturers took a bath because consumers just couldn’t get behind Carey’s branding.
My take? Let’s just say I don’t think Mariah Carey should start polishing up her crown as “Queen of Christmas” just yet. 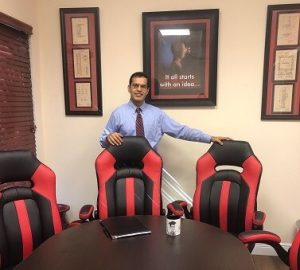 John Rizvi is a Registered and Board Certified Patent Attorney, Adjunct Professor of Intellectual Property Law, best-selling author, and featured speaker on topics of interest to inventors and entrepreneurs (including TEDx).
His books include “Escaping the Gray” and “Think and Grow Rich for Inventors” and have won critical acclaim including an endorsement from Kevin Harrington, one of the original sharks on the hit TV show – Shark Tank, responsible for the successful launch of over 500 products resulting in more than $5 billion in sales worldwide. You can learn more about Professor Rizvi and his patent law practice at www.ThePatentProfessor.com