The Prosthetic Patent that Revolutionized the Medical Field 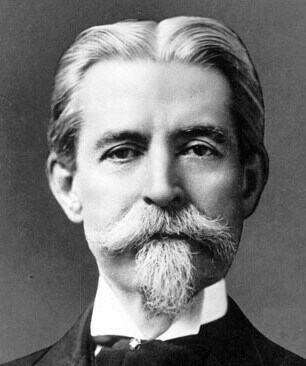 Before Hanger, Inc. grew to be a leading provider of “orthotic and prosthetic patient care,” it was merely an idea conceptualized by James E. Hanger, a former prisoner of war. Like many medical device inventions, the idea to invent something different was derived from a personal problem experienced by Hanger.This month of June, The Patent Professor ® is placing an increased emphasis on medical devices to observe National Men’s Health Month. Our focus is currently on prosthetics.

The oldest known prosthetic traces back to ancient Egyptian days, but Hanger played a unique role in transforming what we now use as an artificial body part. As a medical device patent attorney, I’ve seen dozens of ideas launch into million-dollar inventions because they aimed to solve a significant problem in the medical field. This article provides insight into how Hanger was able to turn his pain with being an amputee into what now stands as a billion-dollar company.

Life Before the Medical Device Patent

At 18 years old, James E. Hanger was an engineering student studying at Washington College. The year was 1861, and the Civil War had begun. Hanger decided to withdraw from school, join his brothers, and enlist in a local cavalry group. While traveling with Virginia volunteers and militia, Hanger was attacked in Philippi by a cannonball causing him to lose his left leg at the knee.An amputation was performed by an Ohio surgeon, thus making Hanger the first documented amputee of the Civil War. Hanger was given the standard and uncomfortable peg-leg to help him get around, and his career as a Confederate States soldier was over.But little did he know, something much more life-changing was underway.

The Loss of a Limb, The Birth of An Idea

Before becoming an innovator and owning a billion-dollar business, Hanger took on roles as a jeweler and teacher. Like numerous inventors before answering their true calling to invent, Hanger tried to find meaning in work that didn’t satisfy him. But, he couldn’t ignore his idea much longer. By the late summer of August 1861, Hanger devoted himself to a new project and emerged in November of that year with a walkable prosthesis made from barrel staves, rubber bumpers, and nails. For a more natural feel, he added hinges and joints. And that was the first creation of “The Hanger Limb.”What immediately set The Hanger Limb apart from other prosthetic limbs were the details. Hanger created a more affordable and realistic prototype. Other prosthetics were stiff and not easily accessible at the time. 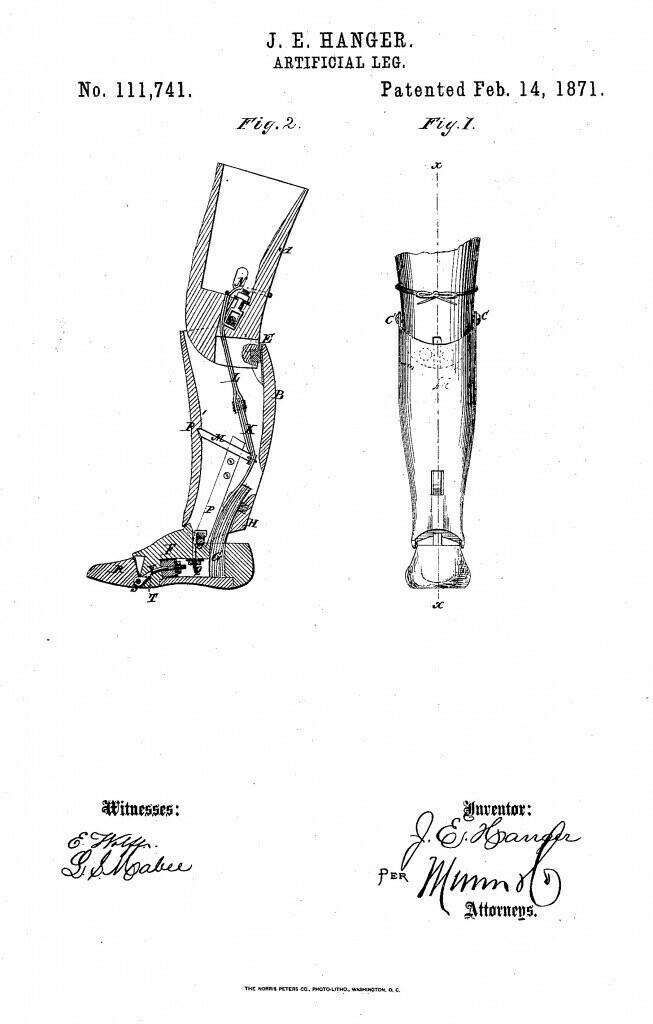 Before the year was over, the Hanger Limb was now in Hanger’s own shop in Virginia. For the next two years, Hanger regularly created and perfected his prosthetics design. And by early 1863, he filed and received a design patent for an “Artificial Limb,” from the Confederate Patent Office. He received an additional patent a few months late for modifying the original design.The Hanger Limb grew in popularity amongst other amputees because of its comfort, sturdiness, construction, and lightweight functionality. Hanger, unfortunately, wasn’t a part of a small number of injured soldiers. A reported 70% of all wounds sustained by Civil War soldiers affect their limbs, making them in dire need of medical attention — and for some, prosthetics. It was in such high demand that the Commonwealth of Virginia and Association for the Relief of Maimed Soldiers ordered over a thousand artificial limbs for amputee veterans in their care.By 1871, Hanger received a U.S. patent for “The Hanger Limb.” And by 1906, J.E. Hanger’s company was incorporated.

The Future of Prosthetics

Hanger, Inc. remains the leading provider of orthotic and prosthetic patient care and can be credited for revolutionizing the prosthetics industry.”The Civil War marked the end of the era of wooden peg legs and simple hooks. The war set the prosthetics industry on a course that would ultimately lead to Today’s quasi-bionic limbs that look like the real thing and can often perform some tasks even better,” according to The American Society of Engineers.So, where does an inventor, like you, come in to further the medical device advances in this industry?According to Verdict Medical Devices, sensory feedback may be the next big thing in prosthetics. Artificial limbs, much like everything else in society, are moving “at an electric pace.””Today’s technologies incorporate more advanced ranges of movement and, with the advent of neuroprosthetics, researchers have brought about the rise of sophisticated brain-controlled prosthetic limbs. These are combined with electrode arrays – placed in the brain, nerves or muscles – to decode the messages between the brain and the limb that control movement, allowing users’ brains to power basic movement in, say, a prosthetic arm,” says their site.For a little less than a decade, Sweden researchers have been studying a prosthetic arm that could be controlled by the mind. Through a process called osseointegration, the prosthesis would be surgically attached to the bone, muscle, and nerves. This mind-control technology is then able to pick up on the brain’s signals allowing people to feel and use the limb naturally. As of now, you can expect advances to continue as the demand for prosthetics and ingenuity of inventors increases.

James E. Hanger turned a lost extremity into an innovative business with his patented medical device. What problems in the medical field could you be solving? I can be of assistance if you have an idea for a medical device and need help understanding your next steps. I focus my practice on medical and dental inventions and recently helped one of my clients secure a multi-million dollar payout.

For more information, visit MedicalDevicePatentAttorneys.com.If you have any questions concerning trademark laws, please email me at newidea@thepatentprofessor.com to get your questions answered. 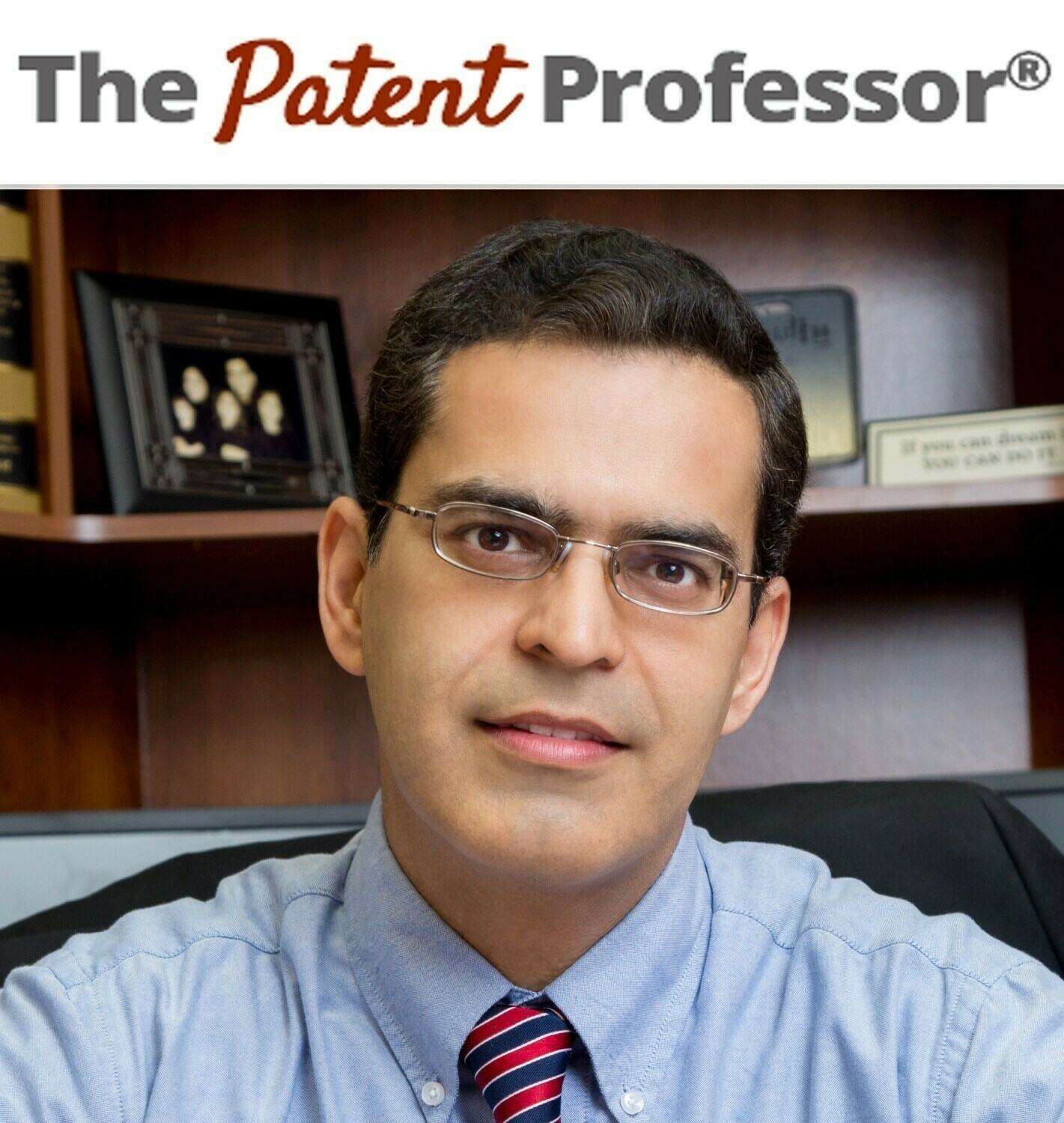 John Rizvi is a Registered and Board Certified Patent Attorney, Adjunct Professor of Intellectual Property Law, best-selling author, and featured speaker on topics of interest to inventors and entrepreneurs (including TEDx).His books include “Escaping the Gray” and “Think and Grow Rich for Inventors” and have won critical acclaim including an endorsement from Kevin

Harrington, one of the original sharks on the hit TV show – Shark Tank, responsible for the successful launch of over 500 products resulting in more than $5 billion in sales worldwide. You can learn more about Professor Rizvi his patent law practice