It Effortlessly Floats on Water Using Inflatable Technology Seen In the Paddleboard industry.

In a moment of inspirational ingenuity my client Gerard D’Offay channeled the creative success of the iconic toy, LEGO®, to redefine the way modern day docking systems are built and arranged in the marine and yachting sectors.

His patented inflatable, easy-to-install docking system, Versifloat®, is a lesson in simplicity and gritty entrepreneurship, using a simple brick approach to unlock endless arrangements on the water.

To this day, he acknowledges the critical role patents played in securing his intellectual property and allowing his team to build market share in his local markets and nationally.

In fact, this focused and dedicated entrepreneur, started with a SINGLE patent and grew it into several annexes.

Gerard’s patent allows him to fend off copycat infringers in the U.S. and abroad.

You will find Gerard active and present at some of the biggest yachting events in the world, including the Miami Boat Show, where he gives first-hand demonstrations as to how these floating “bricks” click together to build sturdy and secure floating platforms.   Nearby, you may find other clients of mine, including Troy Faletra, who recently won a Miami Boat Show innovation award for his marine safety device, ThrowRaft®.

If there is one thing we have learned from the stellar success of LEGO®, is that all of us love building things using the creative channels of our mind.

Gerard had spent a lifetime at sea, captaining mega yachts across several oceans.

Each time he pulled into a new inlet, mooring or port, his crew always struggled to procure or launch suitable working platforms.

Whether its availability, size or weight, getting traditional platforms close to a motor yacht for repairs (or recreational use) can be backbreaking work, laced with stress and sweat! 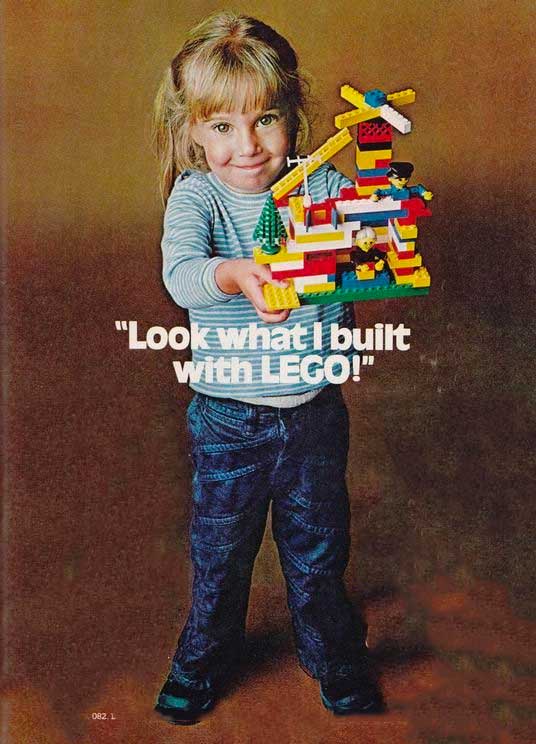 Over time an idea slowly formed in his mind fueled by his early childhood experiences of using LEGO®  to build anything his heart desired.

At the same time, he noted the spectacular growth and interest in inflatable paddleboards. Gerard had procured countless paddleboards as marine “toys” for bored owners onboard these luxurious motor yachts.

Each time he helped his crew launch the paddleboards in exclusive ocean getaways he would examine the engineering of the boards more closely.  He noted several layers of materials tied together by tiny thin threads that he later learned was part of a manufacturing process known as “drop stitching”.

These two disparate toys – LEGO® and Inflatable Paddleboards – slowly merged into his mind’s eye as a future ingle, universal floating canvas that could potentially disrupt the traditional approaches to docking systems.

While many Americans are natural problem solvers, only a few have the will and  vision to execute on their commercial dreams.  One of the reasons for this is because they often believe their idea is too SIMPLE to be protected by intellectual property.

Or, that it will ultimately fail commercially.

or simply because friends and family shoot down the idea saying it will never work or will never prove popular.

In fact, Gerard would later tell me that he carried his idea for a portable inter-clicking docking system around in his head for years before making the decision to start a business around it.

This took great courage on his part, since he was in immigrant from South Africa with limited capital and a risky, unproven idea.

He knew that in order to succeed in the competitive landscapes of Florida, he needed to first protect his idea.  While I was not the first patent attorney he approached, I would be the last.

It’s a relationship that’s lasted over a decade and continues to this day.

I remember him telling me that I struck him more as a ‘scholar’ than a ‘businessman”, something he actually appreciated.

When I laughed and explained that I was also an Adjunct Professor of Law at Nova Southeastern University, he felt more at ease.

He not only wanted a patent lawyer with deep IP experience but someone who had a genuine interest in learning more about his creative idea.

In essence, this was the very reason I had left a comfortable and lucrative position at Fish & Neave, one of the most famous intellectual property firms of all time,  to work with early stage inventors before they became the next Steve Jobs or Sara Blakely.

Inventors like Gerard were the impetus for starting my own firm in Florida after being told that it was career suicide to leave an institution like Fish & Neave, credited for securing patents for famous inventors, like the Wright Brothers and Thomas Edison.

Needless to say, Fish & Neave are no longer in existence, while my new 10,000 square foot patent headquarters continue to thrive and grow – all because I wanted to work with small, garage inventors like Gerard.

The journey that Gerard was taking was one I wanted my law firm to be part of.   It filled me with excitement and joy to unleash the full power of intellectual property protection on his fledgling startup that would shake up the marine sector.

We started with a single patent application that set out to protect his system. The opening line read: A non-self-propelled, floatable structure for supporting people, animals, machinery or other loads is disclosed, having a floatable body designed to float on water, and a retention skirt that protrudes downwardly from a peripheral edge of the floatable body.

He initially sought to leverage fast and cheaper production workflows in the far east.

Should Inventors Turn to China?

Like many of my other clients, including Valerie Carbone who invented EyeBandz®, turning to Chinese manufacturers can be challenging, depending on the nature of the startup.  Yet despite these issues, new ways to build and distribute patented products always emerge, often pulling a company in exciting (and sometimes, painful) new directions.

Gerard would frequently travel to his manufacturing partners to tighten up quality control.  More often than not, they ended up exploiting him financially.

He realized that in order to build a world-class product he needed to bring the manufacturing process back to the United States.

“I essentially had to re-invent myself  and take the bulls by the horn,” he said.

This turned his operation into a custom development facility for floating dock systems.  The bulk of his day-to-day business soon became research & development (R & D), opening up a rich vista of product differentiation that in many respects is the marine personification of Lego.

The Magic Sauce (Or “Stitch”)

Instead of using glue, Gerard successfully found a way to weld drop-stitch fabric in order to hold his system together, developing his own tools and methods to implement the technique.

In fact, not only is Gerald the sole US manufacturer who uses drop-stitch fabric, but he is also the only manufacturer in the world who has successfully welded drop-stitch. He achieved this distinction while also maintaining cosmetic appeal, a remarkable feat for a first-time entrepreneur.

The evolution of these LEGO-like arrangements emerged at a recent Miami Boat Show.  He revealed his product line can now be tailored towards vertical niches like hotel resorts, allowing operators to offer floating gazebos and docking stations for jet skis.

The modular bricks incorporate Velcro®  floorboards allowing the assembler to cross-pollinate one raft to another using a continuous wooden surface.

Little brain power is needed to click the panels together to create a stable, lengthy floating surface that can service just about any marine requirement.

It’s an addictive experience, making a child’s play of a once laborious process.

It also illustrates the elegant and evolutionary process of inventing. You start with one idea but over time it grows and expands to include previously unanticipated angles or directions.

In all cases, inventors use patents to protect each phase of this journey and establish market leadership.

I must emphasize to inventors reading this that the journey above has not always been an easy one for Gerard.  Successful startups are always copied (and emulated) and that puts pressures on profits and creates stress.

Gerard’s operation is no different.

“You have to protect yourself, there is no doubt about it. I have had several instances of infringement, but John put my mind at ease with regards to protecting myself. It gave me the confidence to go forward and carry on doing what I’m doing.”

Over the last decade, Gerard has placed a strong emphasis on the custom development aspects of his business.  This is time-intensive and requires a fanatical attention to detail by his team.

Akin to craftsmen, they rely on the protection of the United States Patent & Trademark Office (USPTO) to ensure their commercial process is not stolen by copycat infringers.

Gerard is rightly proud of his utility-patented inflatable platforms that are designed with optimum stability, ease of use, limited storage, versatile functionality, and elegant ergonomics.

Like many of my other clients he sees himself as an “Outsider”.

This marine maverick is proudly anti-establishment and not a fan of bureaucratic red tape.

“I prefer dealing with people that when I speak to them, I look them in the eye. I know they’re telling the truth.  I did this with John. When I need anything, I always go him,” said Gerard.

I consider Gerard a pioneer in the marine industry and true innovator. He is man of the sea or what one would call a ‘waterman’ with a vested interest in marine inflatable technology.

I cannot wait to see the next phase in Gerard’s journey as a marine inventor.  With over a decade of experience under his belt, he knows his market intimately, including the unique needs of his customers in marine-related sectors.

When he needs further intellectual property protection my team will be ready, willing and committed to help him protect his inventions.

In the meantime, I wish him Fair Winds & Calm Seas.

I consider Gerard a pioneer in the marine industry and true innovator. He is man of the sea or what one would call a ‘waterman’ with a vested interest in marine inflatable technology.

Others, too, fall into this mold, including. including Shane Dorian, a surfing gladiator, legend, and survivor who developed the patented inflatable surf vest, V1.

A fellow surfer, client and friend of mine, Troy Faletra, pioneered another patented inflatable marvel called ThrowRaft which is the first device to be approved by the U.S. Coast Guard.   Both of these devices literally save lives at sea and employ a form of inflatable technology similar to Gerard’s invention.
In all three cases, these inventors had a special bond with the ocean and the willpower to see their idea through to the commercial finish line.

In big waves, a surfing invention is born 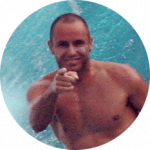 In big waves, a surfing invention is born 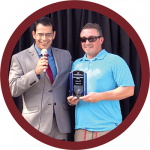 Wilhelm Kress was a gifted aviation inventor who helped pioneer some groundbreaking ideas for early sea planes. Unfortunately, unlike Troy, Shane and Gerard above, he failed to patent several innovations. Additionally, one of his designs neglected a major necessary component on the floats of the craft and, while takeoff was achieved, the machine later sank. This again illustrates the remarkable value and power of inflatable technology that would over time influence several industries, including the sea plane sector. You will note  in the photo further above that Gerard’s floating dock technology is perfectly adaptable for mooring sea planes in deep or shallow waters